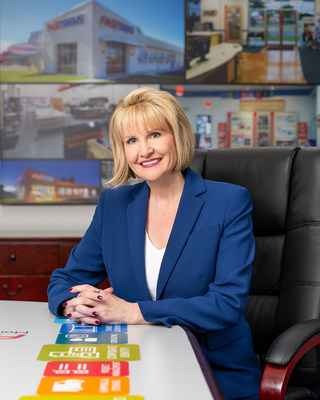 During the Closing General Session, Monson accepted the chair's gavel and stepped into her new role that current IFA Chair, David Barr, held for the past year.

A strong advocate for small business enterprise and franchising, Monson has spent time serving on the Board of Directors for the International Franchise Association (IFA). Through her service with the IFA, Monson works to help further the IFA's mission of protecting and promoting franchising through government relations, public relations and educational programs.

In 2009, Monson was honored by the International Franchise Association (IFA) as the Bonny LeVine Award recipient. This prestigious award is bestowed upon a female franchisor or franchisee who has demonstrated ability in franchising through contribution to the growth of the business, contributions to her community through board positions, volunteer work and activities that promote the professional advancement of women, and contributions as a mentor to women in franchising.

Monson was involved with the second annual IFA's fall "fly-in" event in Washington DC (originally called Franchise Appreciation Day and now called the Franchise Action Network (FAN) Annual Meeting) in 2000 and has attended all but one ever since.

"In my opinion, the FAN Annual Meeting and fly-in is the most valuable IFA meeting for franchisees, along with their franchisors, to attend each year," said Monson. "At this meeting, the IFA educates attendees on critical issues that could affect the franchise business model and how to effectively speak with House Members and Senators, making it a positive experience, even for first-time attendees, as the IFA sets up all meetings on Capitol Hill, making advocacy simple and effective. The 2020 fly-in meeting will be held September 15 and 16."

Monson's work with the IFA in 2020 will center around protecting and enhancing the franchise business model through teaching and promoting franchising best practices to franchisors, continuing with the IFA's strong Government Relations (GR) outreach and increasing the membership of the IFA.

"It is an incredible honor to be elected to the position of IFA Chair," said Monson. "I love franchising; franchising enables people to own their own business and benefit from the power of a brand along with the brand's marketing, advertising, training and support. I look forward to serving the franchising community through my appointment and doing my part to protect, promote and enhance franchising."

FASTSIGNS International, Inc. celebrates its 35th anniversary in business in 2020 as the leading sign and visual communications franchisor in North America, and is the worldwide franchisor of more than 725 independently owned and operated FASTSIGNS® centers in 9 countries including the United States, Canada, Chile, England, Grand Cayman, Puerto Rico, the United Arab Emirates, Malta, France, and Australia (where centers operate as SIGNWAVE®).

FASTSIGNS locations provide comprehensive signage and visual graphic solutions to help companies of all sizes and across all industries attract more attention, communicate their message, promote their products, help visitors find their way and extend their branding across all of their customer touch points. FASTSIGNS has been ranked the #1 franchise opportunity in its category in Entrepreneur magazine's Franchise 500 for the past four years, a 2019 Top Franchises for Veterans by Franchise Business Review and a 2019 America's Best Franchises to Buy list by Forbes magazine.

About the International Franchise Association

Celebrating 58 years of excellence, education and advocacy, the International Franchise Association is the world's oldest and largest organization representing franchising worldwide. IFA works through its government relations and public policy, media relations and educational programs to protect, enhance and promote franchising and the more than 733,000 franchise establishments that support nearly 7.6 million direct jobs, $674.3 billion of economic output for the U.S. economy and 2.5 percent of the Gross Domestic Product (GDP). IFA members include franchise companies in over 300 different business format categories, individual franchisees and companies that support the industry in marketing, law, technology and business development.