BERLIN, Sept. 2, 2017 /PRNewswire/ -- IFA 2017, one of the world's three largest trade shows for consumer electronics, opened in Berlin, Germany on September 1, local time, revitalizing the color TV market that had been experiencing a sluggish period during the first half of the year. The event, which has attracted much attention worldwide, provided industry leaders with a platform to compete with their products and explore future trends in technology. As a repeat exhibitor at IFA, leading Chinese TV manufacturer Skyworth showcased to the world its achievements in domestic and international markets over the recent year as well as the direction the firm is taking in terms of its development strategy. 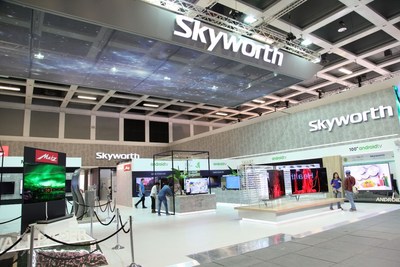 At this year's IFA, Skyworth expanded its OLED TV exhibit lineup by showcasing the latest addition, the W8, on the heels of the exhibition of the firm's highly recognized S9-I and S9D at IFA 2016, and the launch of Wallpaper this year. The W8 OLED TV is characterized by its split- and folding-type design, 3.65mm ultrathin OLED screen affixed to a toughened glass rear panel, an integration of chips, acoustics and other components into the Smart Bar under the screen, as well as the JBL audio system designed especially for Skyworth's separate-unit products.

In addition to Skyworth's large-size OLED exhibits, the company also debuted the 5.2" flexible AMOLED screen created by Guangzhou New Vision Opto-Electronic Technology, a Skyworth subsidiary. It is the first flexible full-color AMOLED display made in China. The 5.2" 0.01mm-thick screen weighs less than 1 gram and is able to display images and videos even when curved and folded. The product represents a breakthrough in the country's flexible AMOLED display sector and deploys the most advanced flexible display technology in China. The diversity of possible applications for flexible display is huge, opening up opportunities for Skyworth's flexible AMOLED display in smartphones, smartwatches, auto dashboards and TVs, and placing the firm in the position of leading the charge in the transformation of display technology from flat to flexible.

In Skyworth's white goods exhibition area, the company showcased its intelligent wall-hanging air conditioner with both air conditioning and cleaning functions. It is the result of Skyworth's two years of effort in research and development. The advanced product incorporating Skyworth's next generation BlueMotion converter control technology can reduce energy use by up to 60%. With the AMS+ filtering system, the unit is able to filter 300 cubic meters of air per hour. In addition, the unit is washable with water and can be removed, stored, and re-installed for repeated use without any additional cost. The 3D Air feature can shift the direction of the cooled or filtered current of air upward or downward, preventing the air from blowing directly on the room's occupants, through the application of a new technology that controls the distribution of the air current throughout the air-cooled environment. In addition to the low noise level of 18db, the full DC inverter technology helps achieve temperature control accuracy to within 0.1°C required for incubators used by neonatology departments in hospitals.

Notably, Skyworth also displayed its iconic smart home product – a smart multifunctional minibar, which combines a coffee table, refrigerator and music player. In addition to storing food and tea-leaves, the minibar also comes equipped with a USB charger and Bluetooth control functions, eliminating the need to extend the patch board all the way into the bedroom from another room in the house.

During this year's IFA, Skyworth debuted its full line of smart household appliances with the aim of showcasing its achievements and enhanced presence in the smart home market. Skyworth gathered together its leading products across the TV, refrigeration, washing machine, air conditioning and acoustics categories in Berlin. To embrace the opportunities and address the challenges in the global consumer electronics market, Skyworth is demonstrating its ability to create a new color TV-centered living room ecosystem. 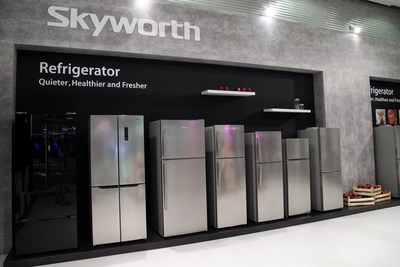 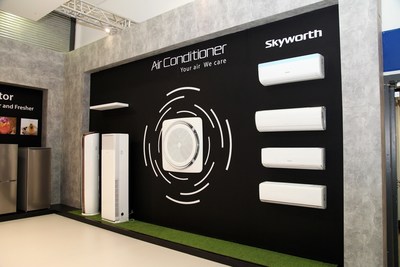